Canadian artist Emily Carr was born in Victoria, British Columbia in 1871. She studied in San Francisco in 1889–1895, and in 1899 she travelled to England, where she was involved with the St. Ives group and with Hubert von Herkomer’s private school. She lived in France in 1910 where the work of the Fauves influenced colour in her work and where she came into contact with Frances Hodgkins. Discouraged by her lack of artistic success, she returned to Victoria where she came close to giving up art altogether.2

However, her contact with the Group of Seven in 1930 resurrected her interest in art, and throughout the 1930s she specialized in scenes from the lives and rituals of the First Nations. She also showed her awareness of Native Canadian culture through a number of works representing the British Columbian rainforest. She lived among the tribes to research her subjects. Many of her Expressionist paintings represent totem poles and other artefacts of First Nations culture.2

Two years before she painted Indian Church, Lawren Harris and his fellow Group of Seven members recognized that Carr, in British Columbia, and quite independently was achieving their mission for Canadian Art.1

A trip to Nootka Island, British Columbia, inspired Emily Carr to paint ‘Indian Church’ in 1929. A fascination with the pacific coast and the spirituality of the Native people were the perpetual driving force of her work.  The artist’s primitive and spiritual sides shine through in the painting that symbolizes life and death. The graveyard around the church, pale in color, symbolizes death; while the rainforest of rich green tones reflects life. Harris rhapsodized about the painting, for in it Carr captured the spirituality of Canada’s landscape in an original and modern way.1,2

Lawren Harris purchased the painting at the full asking price of $175, then ensured it’s inclusion in several major exhibitions between 1930 and his death in 1970. Now part of the Art Gallery of Ontario Collection, it continues to anchor major exhibitions.1

This painting was chosen specifically by A.J. Casson for reproduction at Sampson Matthews, one of a few he requested himself for the silkscreen process.2 The print was created in 1947, two years after Carr’s death, and has been one of the most popular silkscreens ever since. A.J. Casson did the translation himself, based on the oil painting.1 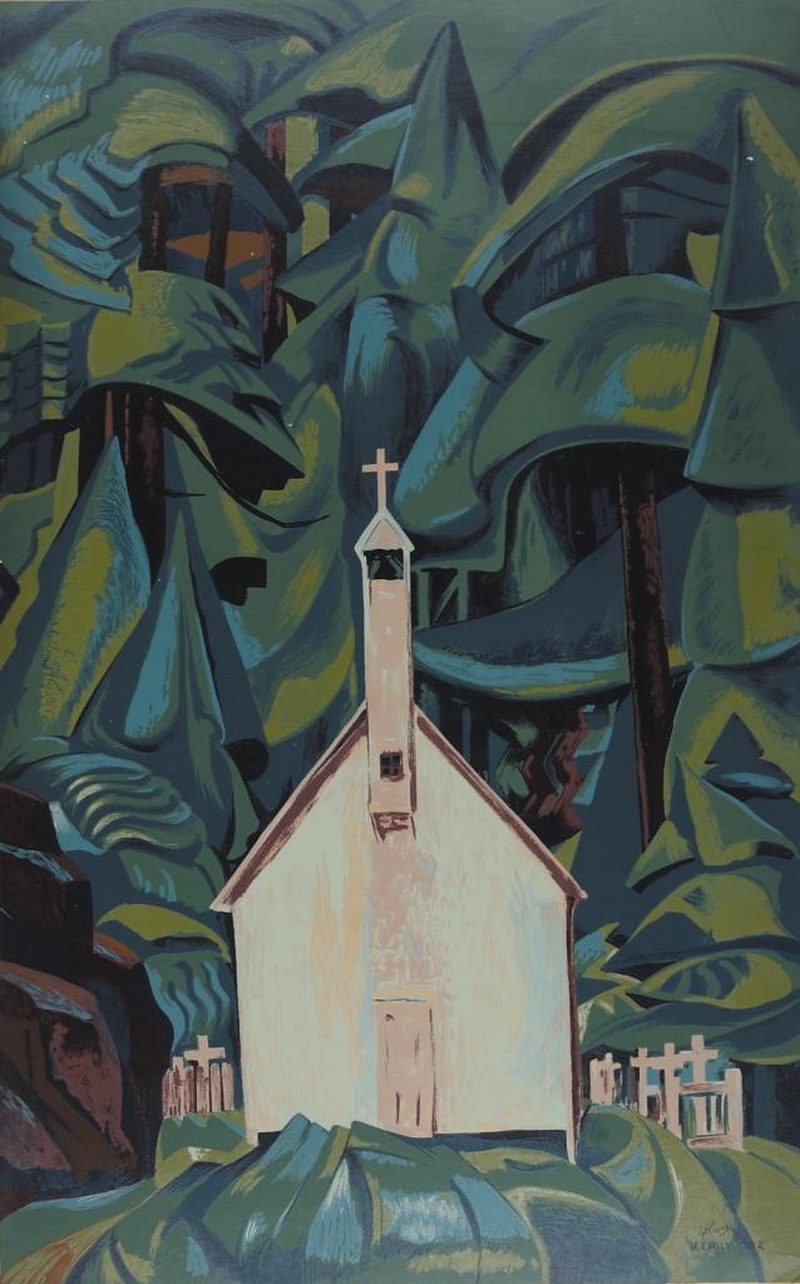