Alan Syliboy was born and raised in Truro, Nova Scotia. Living in the Millbrook First Nations community, he journeys through his life with a demeanor of strength. An established Mi’kmaq artist, Syliboy’s artistic vocabulary is inspired by the indigenous petroglyphs of Nova Scotia.

1999 At the Great Harbour, Art Gallery of Nova Scotia

“I see making art as a way of organizing chaos. Sometimes within the chaos of making a painting, a symbol in the shape of a moose or a caribou will walk through my consciousness in a form that resembles an ancient petroglyph. My work is inspired by the ancient petroglyphs which were carved in stone by my ancestors on walls in caves. This was their way to capture and respect the spirit of the subject. When I paint these images, I feel I am channeling a way to bring their spirits back into our consciousness.  At one time, these drawings were predominant and lived within our culture. Today, most are no longer visible in their original environments, but I believe the earth has a memory of the spirits they contained. My work lives in the moment but is profoundly influenced by the past; this gives me my bearings as an artist, and as a human being. My ancestors have provided me with a spiritual global navigation system, and I like to believe that what I do helps to keep the spirits evolving.”  Alan Syliboy 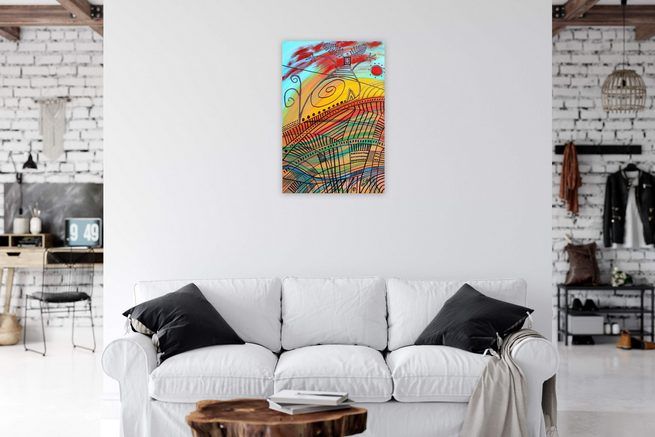