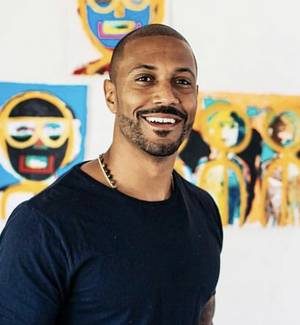 Brian Poli-Dixon is an artist based in Miami, Florida. After a successful career as a wide receiver for the UCLA Bruins, he spent several years playing in the NFL before having to leave the sport prematurely due to a leg injury. This allowed him to rediscover his love of art, which he has since explored and developed with his distinctive paintings by using raw color, texture and form to create emotionally laden work in a variety of styles. His work strives to be relatable, accessible and enjoyable while also provoking thought and eliciting complex reactions. His practice also extends into photography and sculptural canvas.

Get, Got, Be Genius!

The artist, the athlete, Brian Poli-Dixon

Almost from the time he could hold a pencil, Brian Poli-Dixon began to draw. Being born and raised in Tucson, Arizona, the sights, sounds, and sensations innate to his environment all left their mark on his illustrations. As he became increasingly aware of his natural surroundings, he found his imagination nourished and enriched by the juxtaposition of plant life vibrancy, animal species variety, as well as the ancient cultures of the Pueblo peoples.

As much as his external surroundings inspired him to draw during childhood, his creativity and self-expression throughout his youth were more influenced by his parents and life at home. His father valued the idea that all people have a commonness that equalizes and unites them across society. Brian’s mother impressed upon him a fundamental appreciation for the importance of dignity, ceremony, and decorum. By blending his father’s optimistic outlook with his mother’s aesthetic sensibilities at a young age, Brian gained an enduring openness to physically exploring and creatively expressing whatever life, people, and new experiences had to offer him.

Although he continued drawing, he also expressed his creativity through photography and painting as ways to capture, layer, and interpret complex experiences. His athleticism infused his creative process with a: deep-rooted commitment to discipline, training, and practicing; drive and determination for excellence; mastery over mind and body; rigorous attention to detail; as well as, a clarity and focus of purpose regarding artistic methods and media. By imbibing his artistic/athletic hybridity into his drawings, photographs, and paintings, he attained a tremendous sense of self-confidence from deftly living at the emotional, physical, and psychological intersection of the artistic and athletic.

Brian’s talents in art along with his athletic prowess lead him to accept a football scholarship at UCLA in 1997 where he majored in History. His ambitions of pursuing a professional career in the National Football League (NFL), however, came to an abrupt conclusion. After suffering a debilitating leg injury, he left the NFL permanently.

Experience, transform, create. The direct experience of an extreme event often becomes the spark for an individual’s identity to undergo a change from one point of their personal growth towards a more evolved sense of self. At times, a powerful expressiveness happens. Brian once again turned to the transformative nature of his creativity to explore, comprehend, and make sense of this physical trauma. At these profound cross-roads in his life, he reignited his passion for painting:

The paint brush is the physical vehicle that allows the viewer to have a visual look into my subconscious through the manifestation of my work.

Brian Poli-Dixon’s latest collection of paintings layers the personal with the political to invite successively elusive interpretations to emerge. And all the while, the energetic sense of embodiment and physicality he brings to bear on his choices of methods and media remain authentic to his quintessential artistic/athletic hybridity.

Through art, even the most commonplace of possessions may serve as an eloquent metaphor to convey a long-lasting impact. Borrowing the floral bouquet motif from his childhood expressions of love for his mother, alongside feminine figures, he pays homage to Picasso’s use of found objects and collage in art. By intentionally using a juxtaposition of raw colours, course textures, and transitional forms, he elicits the tender, intricate emotions that often accompany revelations of such truths, meaning, and coherence that flow during moments of solitude, silence, and vulnerability.

Invoking Basquiat’s graffiti installations that sought to bring high art to the streets by reframing text into contemporary, meaningful, and accessible imagery, many of Brian’s works in this collection use an interplay of text and masculine motifs to again extrapolate from his personal experiences of creative expression. The last two letters in ‘genius’ are ‘u’ and ‘s’-us. Recognizing this plurality, his clever and recurrent treatment of the word ‘genius’ liberates it from being a narrow, elitist, and exclusionary judgement bent on separating and oppressing, and instead elevates it into an expansive ideal that is inclusive of ‘us’ all.

He accomplishes this goal by the: repetitious appropriation and recontextualization of the term ‘genius’ alongside a diversity of words such as ‘universal’; as well as, applying a decidedly bold, vibrant, and graphic pallet. Genius now becomes more about: bringing ‘us’ together; having the courage and resolve to discover that which is special and unique in each individual; and then, ultimately embracing, channeling, and sharing this genius with everyone.

Edgy, urban, and with a sophisticated use of intertextuality, Brian Poli-Dixon’s latest collection signifies a theme that is highly relevant: Genius is us.

When I paint, I feel a sense of uncertainty of the outcome. Though this process is now fulfilling for me, and I welcome it with openness, I once found the experience stressful precisely because I didn’t know the outcome. Over time I have discovered a sense of familiarity and comfort within this space of discontinuity. I now embrace my artistic journeys and understand that I eventually create something personal that I truly love.
~ Brian Poli-Dixon~

View any, or all of Brian’s Paintings on our Sample Wall

Upload a Photo of Your Space and View Brian’s Paintings