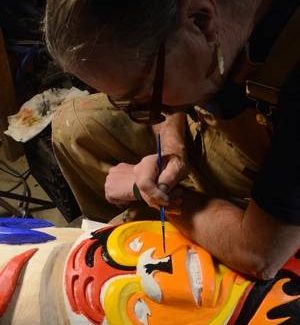 Kris Nahrgang’s art is a continuation of the spirit and tradition of rock and story pole carving. His style has a balance of innovative, modern and traditional elements which have led to a growing recognition of his work across Canada and the world. His work has been noted in art periodicals including Insight, Art Impression and Collectibles, as well as MacLeans Magazine.

R. Kris Nahrgang, is a multi-disciplinary artist working in wood, stone and traditional oil mediums.  He is also an advocate for the rights of First Nations communities in Ontario and has liaised between Native and non-native groups with respect to archaeology since 2000.

Kris Nahrgang is a Status, Mississauga Ojibway Treaty Indian – status held at Curve Lake.  His home is located close to the site of the Peterborough Petroglyphs which date back over a thousand years and are recognized as the largest single concentration of rock carvings in Canada.

Kris’ art is a continuation of this spirit and tradition of rock and story pole carving. His style has a balance of innovative, modern and traditional elements which have led to a growing recognition of his work across Canada and the world. His work has been noted in art periodicals including Insight, Art Impression and Collectibles, as well as MacLean’s Magazine.

An experienced diver, Mr. Nahrgang began an undergraduate degree in anthropology at Trent University, and has worked in a close relationship with underwater archaeologists at Parks Canada, mainly along the Trent Severn. Mr. Nahrgang has attempted to establish a cultural heritage/archaeological research and curatorial facility that will serve the needs of a large group of the smaller southern Ontario native communities. He served as a member of the advisory committee struck by the Ministry of Culture to contribute to the development of new Stage 1-4 archaeological assessment technical guidelines. As an Associate to the firm, he has worked closely with Archaeological Services Inc. on several projects, including the Aboriginal Consultation initiative for the North Pickering Development Plan. He is consulting widely with First Nations on matters relating to the protection of Aboriginal cultural heritage.

Recently Kris was commissioned by the Canadian National Exhibition to produce a 36’ UNITY POLE. The Pole was unveiled at the CNE in August of 2017, receiving national and international acclaim from the public and the media.   Kris’s work can be found in numerous private and corporate collection including Anne Murray, Bill Cosby, Justin Trudeau, Keech Rainwater (of Lonestar), Nik Antropov (Atlanta Thrashers), Brian Skinner (Phoenix Suns).

In 2018 APTN (Aboriginal Peoples Television Network) will air Season One of “Future History”, a documentary series that challenges the colonial narrative and celebrates the reclamation of Indigenous knowledge and identity, which Kris co-created and hosts with dancer, choreographer, actor and activist Sarain Fox.

Artist, Self Employed, Spirit of the Stone

Scugog Council for the Arts, “Focus on First Nations”, October 2014

Native Liaison and Consultant for Ministry of Municipal Affairs, 2004-2007

Stakeholder meeting for changes to the Ontario Heritage Act, 2002-2003

Protecting First Nations History and Archaeology under the Trent Severn Waterway.  Paper presented to the Society of American Archaeology, Montreal, 2004.

First Nations History, and Consultation Presentation delivered for the Ministry of Municipal Affairs and Housing, the Ontario Realty Corporation, and Municipal/ Provincial administrator venues across southern Ontario talks presented in conjunction with Dr. Ron Williamson presenting the history of the First Nations and peopling of Ontario, focusing on the issues that affect them and the consultation process in Ontario today.  Delivered approximately 30 presentations 2005-2008

2017 – Executive Producer and Host of “Future History” A documentary series about shifting the colonial narrative and celebrating the reclamation of indigenous knowledge and identity.  13 Episode Series to be featured on APTN in 2018

“Spirit of the Earth” was presented to former U.S. President George Bush.

“Reunion” was presented to the Duke of York, Prince Andrew

“Trails of Nobility” presented to His Royal Highness, Prince Charles

“Story poles are not entirely traditional to Anishnaabe people.  “We did however, erect clan poles to honour our lineage.  My poles reflect that tradition incorporating traditional clan symbols and contemporary images.”  If the poles are finished with paint, the designs are ‘Woodland’ in style, with vibrant colours, and distinct lines.  Story poles tell a story.  Each symbol or totem on a pole represents a feeling, a person, an animal, a place, or a concept.”