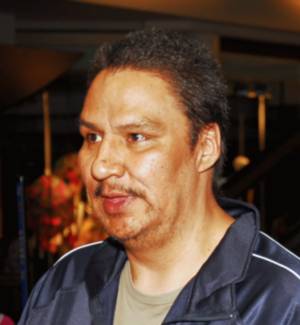 Christian Morrisseau (1969-2022) The son of the renowned Woodland Artist, Norval Morrisseau and Harriet Morrisseau was born in 1969. Christian was the youngest of seven children and the second to follow in his father’s footsteps, being an accomplished artist in his own right.

Christian was born on December 11, 1969 and raised in Red Lake, Ontario. He was the youngest of Seven Children of the renowned Woodland Artist, Norval Morrisseau. For several years Christian lived between Thunder Bay and Keewaywin First Nation, Ontario. The signing of the Treaty 5 adhesion in 1910 established the Sandy Lake reserve across the water.  But some families felt left out of the community life there. It was decided to return to their traditional lands, where they used to set up their trap line to catch fur-bearing animals. They named this new place Keewaywin, which means “going home” in Oji-Cree, the language spoken here. “They wanted that feeling of just being home,” say Joe Meekis, a former Keewaywin chief who is now a band councilor, recounting the local lore. “They were lonely for the land.”

Christian was an accomplished artist in his own right. His love of the style of art was traditionally passed down to him by his father, Norval, who in turn learned from his grandfather, Potan. Potan was a well-known and respected traditional Shaman. Christian spent four months learning and listening to his father’s teachings and began     painting in May 2002. He wanted to celebrate his gift and keep the Morrisseau’s family traditions and stories alive. Christian paints in the Woodland style, which was developed by his father Norval upon receiving a vision instructing him to do so. Today there are well over 400 followers that paint in the Woodland style. Christian painted his animal images, landscape, his father and children, his tradition, his legends. Christian was a devout student of his father’s art yet continued to develop his artistic gifts with intensity, discipline, and passion. This passion and devotion were reflected in the success of his pieces, which sold well in many markets during his lifetime and are widely accepted by art lovers. Christian donated works to charitable organizations including; youth organization, diabetes organizations, to the Nishnawbe-Aski Nation ‘Treaty 9’ where Christian was from, the Spirit Bear Youth Coalition and The Outdoor Writers of Canada. Christian also taught the Woodland art style to both native and non-native    students in Thunder Bay and across other northwestern Ontario communities. Christian Morrisseau’s work can be found throughout both internationally and throughout Canada.

During his life, Christian also suffered a great tragedy. His son, Kyle Morrisseau was one of seven students from remote First Nations who died while attending school in Thunder Bay between 2000 and 2014. Their deaths are the subject of one of the largest inquests in Ontario’s history. Christian told the CBC News program The Fifth Estate that Kyle had started painting shortly after his grandfather, Norval Morrisseau died in 2007. “His art was really progressing a lot faster than I would have ever imagined,” Morrisseau said. Kyle Morrisseau was last seen on October 26, 2009 by classmates on the banks of the McIntyre River in Thunder Bay. His body was pulled from the river on November 10. He was the third student from Keewaywin to die during the course of three years, truly a tragic loss in a community numbering 300 residents.

“I speak as one son, an artist, and an Ojibwe. I am a born artist. This is not by accident. I work with and out of Anishnabe myths that have become the mark of the Woodland School of Art. I have had to contend with the terrible strength of my father’s vision. I am not alone. Such was his ability, that there is hardly a Native artist who does not learn from Norval’s artistic strength. My father taught by being. He never gave lessons. Art to him was waking in the morning. Art was revelation of the Ojibwe history. Art was getting ready for bed. I didn’t name it. I just knew it. I lived Norval Morrisseau’s art. My brother David and I sit solidly within the scope of Woodland Art – yet we are seen as different and alone.”

View Christian’s Artwork on the Wall 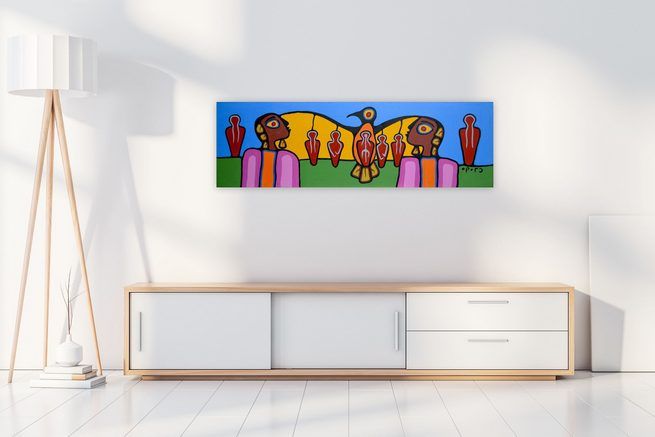 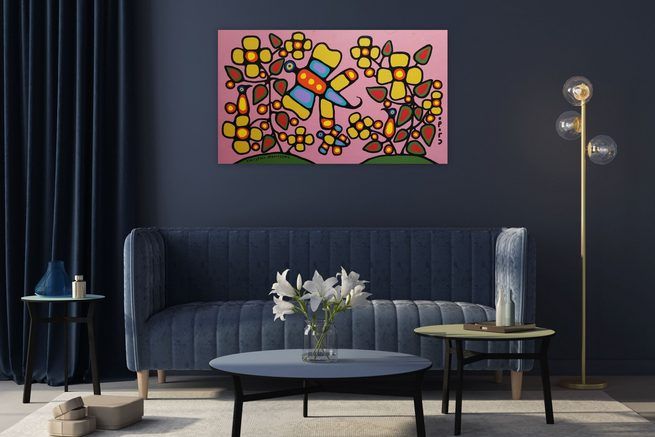