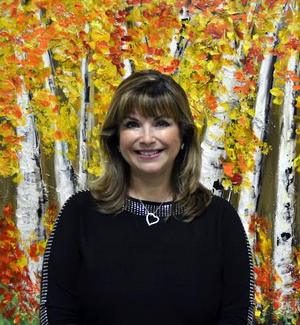 Katerina Mertikas was born in Greece, and now resides Ottawa. A self-taught artist, she has been painting professionally since 1991. The joy depicted in her paintings and her genius as a colourist has won her the admiration of art collectors across Canada and beyond.

The term “naïve art” is a timeless genre that celebrates the human narrative and – in contrast to the frenetic pressures of the outside world – radiates joy, serenity, peace and tranquility. It defines the verdant valleys and happy hamlets of Anna Mary Robertson (”Grandma”) Moses, the luxuriant vegetation and exotic jungles of Henri Rousseau, and the palmy South Sea Isles and pristine Tahitian women of Paul Gauguin.

Internationally renowned painter Katerina Mertikas follows in the footsteps of these great masters. As a naïve expressionist painter whose works are characterized by a refreshing innocence, a charming use of bright colors, with child-like perspective and scale, the near universal appeal of Katerina’s exhilarating paintings portrays the simple, easily-understandable and often idealized scenes of childhood, bustling with color and excitement. Her paintings are full of originality and creativity capturing scenes of the Canadian landscape, its seasons and popular traditions. She does not seek to change the world through her art but rather pretend that the magic of art may help the viewer to turn to the simpler things of life that warms the heart and soothes the soul.

In addition to painting Katerina believes in giving back and contributing to important causes. In 1993 UNICEF chose one of Katerina’s images to be sold internationally as greeting cards and then to grace the cover of their brochure. She has gone on to create more than 20 greeting cards for UNICEF. Katerina has created and donated many painting images for other great organizations, hospitals, and children’s aid societies. Katerina’s works can be found in homes, schools, hospitals and offices across Canada and around the world.

“All of my life I have had a dream and a vision. I am lucky enough to have fulfilled that dream-and then some. I consider myself privileged to have had a successful art career to date; and I look forward to the exciting new opportunities the next part of my journey is sure to bring. Art is very important for me and continues to be the focal point of my life. I paint for the sheer pleasure of creating something that I am proud to share with others. Once I started painting when I was young there was no stopping me. I enjoy visiting museums and art galleries wherever I am and gain inspiration from works of many artists, both past and present. I channel all inspiration back to my studio and to my own work. When I began painting, I looked to my two, then young daughters for ideas. My paintings are mostly of children having fun, playing games depicting innocence and naiveté of childhood some of us long to return to as we grow and face many new challenges in life. The mostly carefree days of youth are something to be captured and remembered!”

View Katerina’s Artwork on the Wall 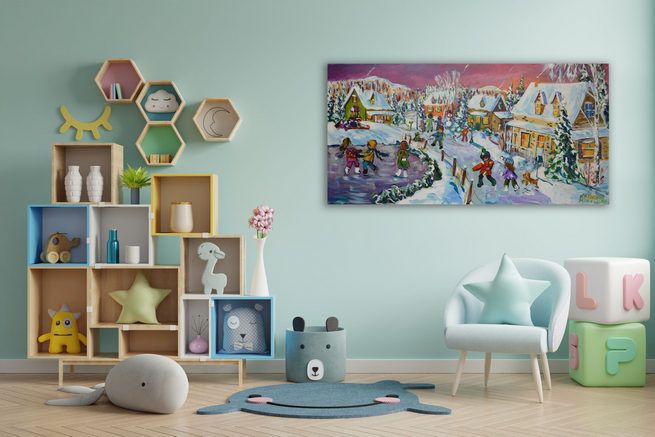