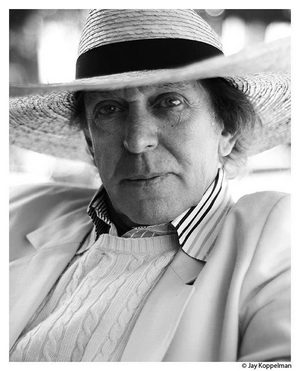 Toller Montague Cranston (1949-2015) had the distinction of being an internationally acclaimed Canadian painter, Olympic athlete and a Member of the Order of Canada. He was born in Hamilton, Ontario and began skating at the age of 7 in the mining town of Swastika (Kirkland Lake). At the age of 11 his family moved to Montreal and he attended high school at the École des Beaux-Arts.

At the age of 18 Toller moved to Toronto on his own to start training with Ellen Burka at the Toronto Cricket Skating and Curling Club. He revolutionized the world of figure skating and impacted generations of skaters by expressing new dimensions of artistry and emotion. He was the sixtime Canadian National Champion (1971-76), World Bronze Medalist (1974), and Olympic Bronze Medalist (1976). He was named Skater of the Century by the European press, is a member of the World Figure Skating Hall of Fame and ensured that Canada would always have a place on the podium of World figure skating.

Toller showed a talent for drawing from a very young age. He once said, “the inclination, the subject matter, the concepts, the sense of colour, the people, the worlds, the imagery — miraculously — was in evidence when I was six years of age.” His formal art education was halted due to the rigorous demands of his training and competition schedules. The global touring that was an integral part of Toller’s skating life gave him the cultural experiences that helped fuel his imagination.

Toller never left art behind and always considered himself an artist first. He painted actively throughout his competitive skating career, making enough money from the sale of his art to cover his skating expenses. His first solo exhibition was held in the home of his skating coach, Ellen Burka. Today his original works his paintings have been featured in more than 250 exhibitions around the world and are included in prominent private and corporate collections worldwide. His distinctive painting style, rich in global influences, exotic androgynous figures, extraordinary florals, and invented landscapes along with Dali-esque angular forms that shock and alter perceptions attract a universal audience. His style hints at various art movements (surrealism, cubism, expressionism), but is ultimately only definable as Toller’s.

After selling his Cabbagetown home in Toronto in the early 1990s, he bought a home in San Miguel de Allende in Mexico where his main focus became his painting. In an interview, he said that San Miguel seduced him. He loved the fact that it was so cosmopolitan. He became very involved in the well-being of the local community and a most generous philanthropist.

Toller expressed his artistry in his lifestyle, and as a writer, raconteur, decorator and television personality. He shared his knowledge of art and art history by introducing fellow skaters to museums and galleries as they toured major cities throughout the world. He held painting workshops for Mexican youth, to teach, inspire and empower. He shared his studio in San Miguel with aspiring painters, supporting and encouraging them by buying and exhibiting their work.

Throughout his life Toller faced challenges and adversities—being told at the age of 15 he would never skate again, he couldn’t bring artistry, emotion and expression to men’s skating, that he couldn’t take figure skating to Broadway and that he’d never make a living from his art. But he did all of these things. He became a World and Olympic medalist and is internationally acknowledged as the man who revolutionized the sport. He headlined theatrical ice shows and sold out the Palace Theatre and Radio City Music Hall. Over the past four decades his paintings have been sought by international collectors. Toller rose beyond what is expected, beyond what is accepted, beyond what is “normal.”

He was fearless in expression, courageous in creativity, and innovative in interpretation. Toller had a determination, dedication and a desire to go where no artist or skater had gone before. He lived life on his terms. He found his way of being in the world and staying true to himself. He was funny, generous, brave, and creative, frail, adventurous and daring.

Toller Cranston passed away at the age of 65 in his studio in San Miguel de Allende, Mexico. His tombstone in San Miguel simply says Toller, Artist, 1949-2015.

Performances
• Created and starred on Broadway in The Ice Show at the Palace Theatre and at Radio City Music Hall.
• Created and starred in TV specials including Dream Weaver (1979), Magic Planet (1983), The True Gift of Christmas (1985), and most notably Strawberry Ice, (1982) the multiple award-winning CBC special that was sold to 67 countries.
• Performed in North America, Europe, China, and Japan with Ice Capades and Holiday on Ice.
• Regular Performances in Stars on Ice and The Big Show.
• Regular competitor at the World Professional Figure Skating Championships.
• Guest judge for Battle of the Blades.
• Official Artist of Skate Canada, 2013.
• Non-skating acting appearance in I Am a Hotel (1983), a music video featuring songs by Leonard Cohen.
• Appeared on the back cover of Joni Mitchell’s album Hejira.

Publications
Toller, 1976, number two in the Canadian non-fiction charts.
A Ram on the Rampage, 1977.
Zero Tollerance: An Intimate Memoir by the Man Who Revolutionized Figure Skating (1997) with Martha Lowder Kimball.
When Hell Freezes Over: Should I Bring My Skates? 2000, with Martha Lowder Kimball.
Ice Cream: Thirty of the Most Interesting Skaters in History, 2002.
The Nutcracker, E. T. A. Hoffmann, Retold by Veronica Tennant. Illustrated by Toller Cranston. 1985.

Each signed, numbered print is matted and framed with a paintbrush from Toller Cranston’s studio in San Miguel de Allende.

The Ice Series provides unique commentary on the contemporary skating world. The concept behind each piece could only have come to an individual who has experienced life in the inner circle of the figure skating elite. This collection will touch all skaters emotionally. In a manner at once highly artistic and subtle, Toller Cranston expressed the inner thoughts and fears of those who are serious about the sport. It is the enigmatic legacy of a great artist who loved skating as few others have. 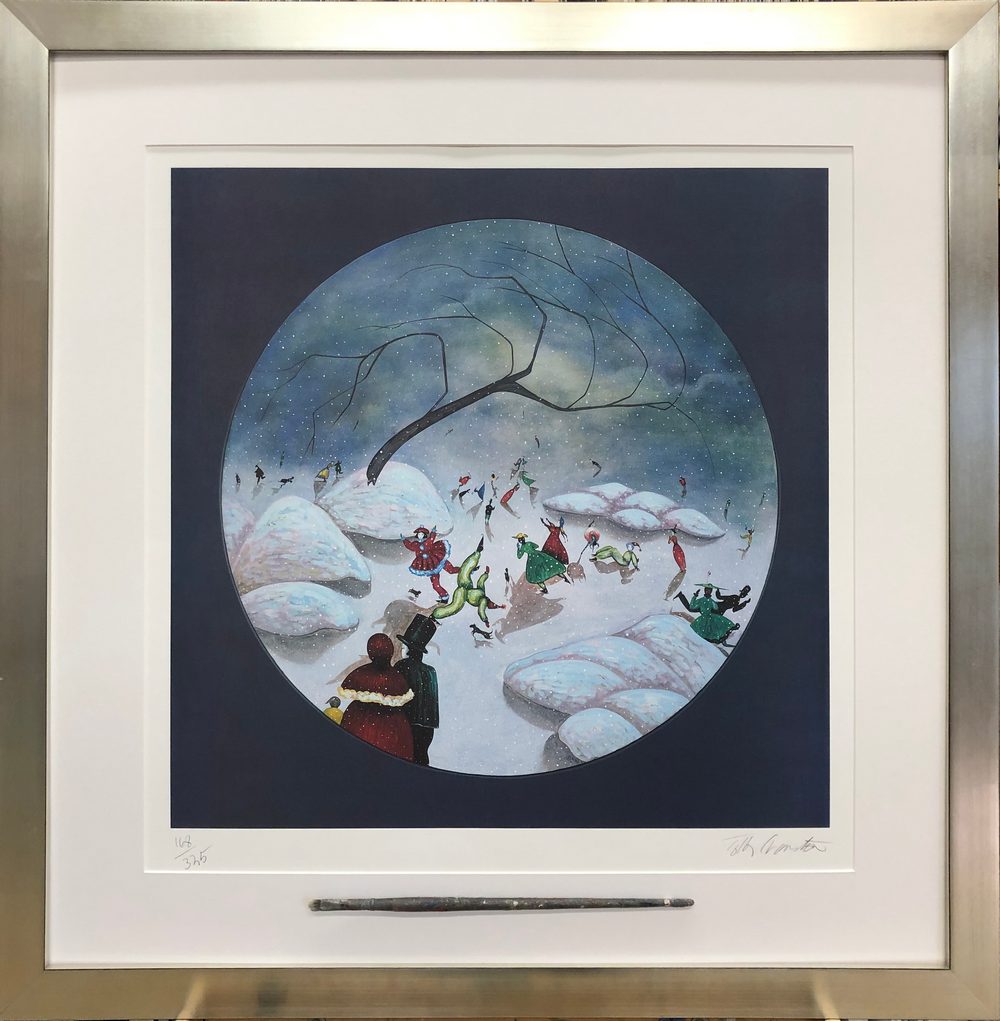 is a window on the world of contemporary skating where skaters come and go, eventually to be replaced by a new generation. The eternal pond or skating rink remains unchanging. 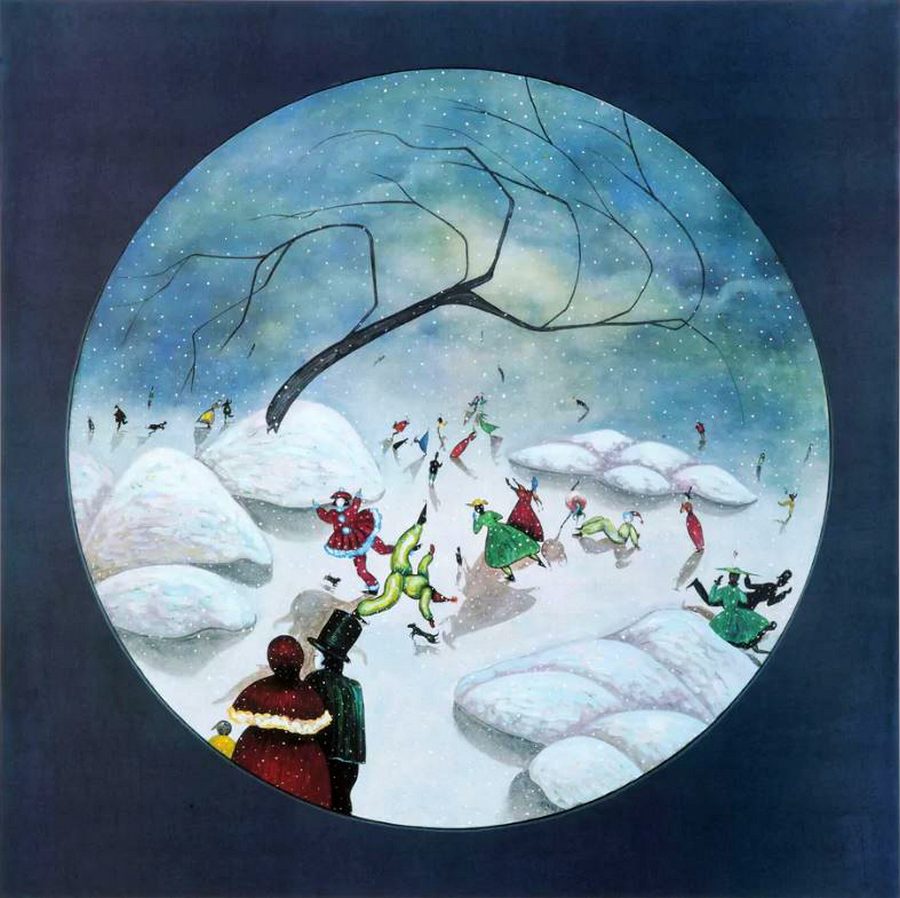 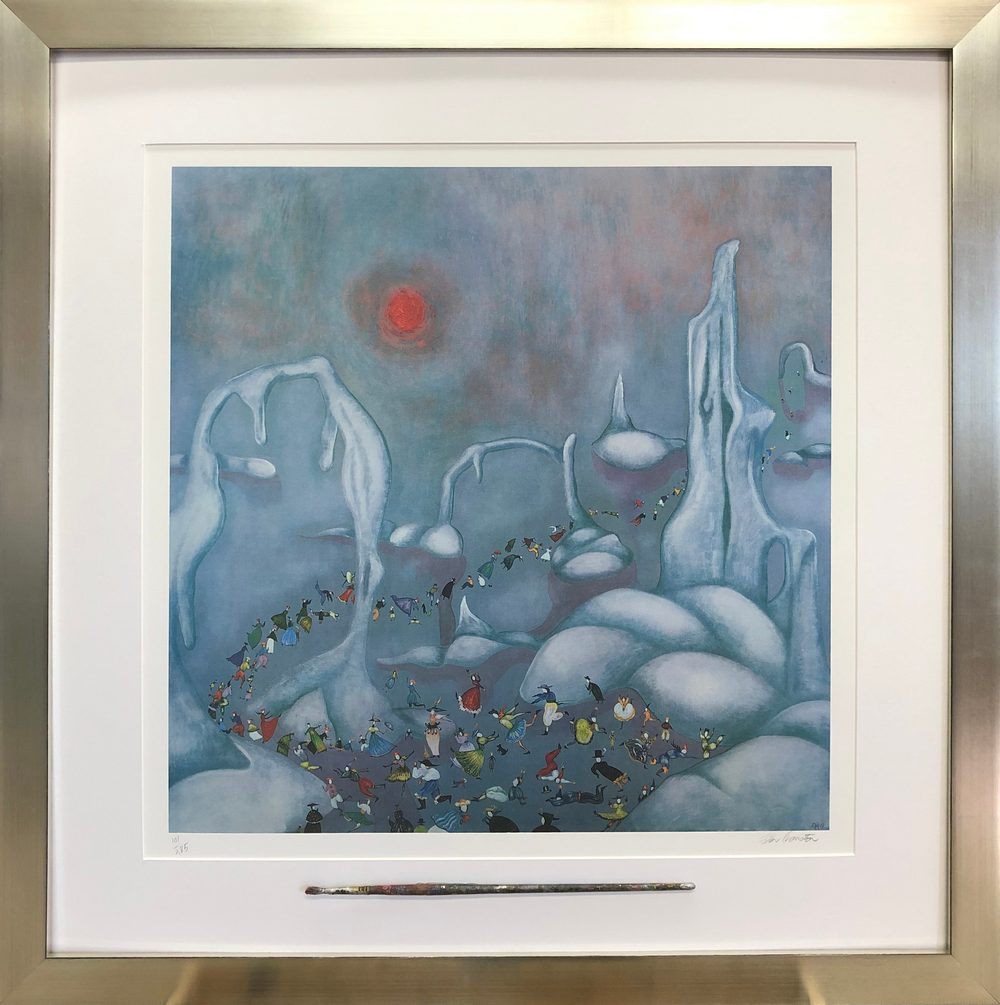 represents a virtual human obstacle course with but one solitary skater completing the course and becoming champion. 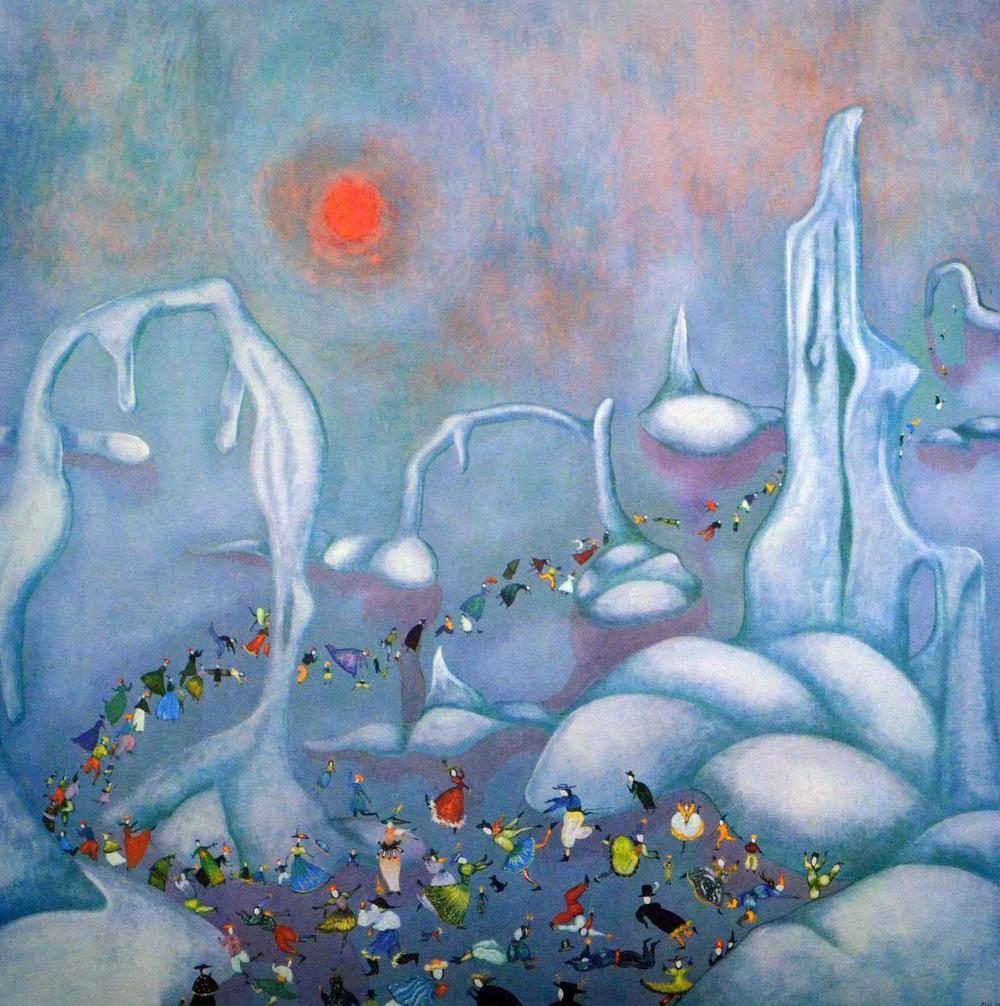 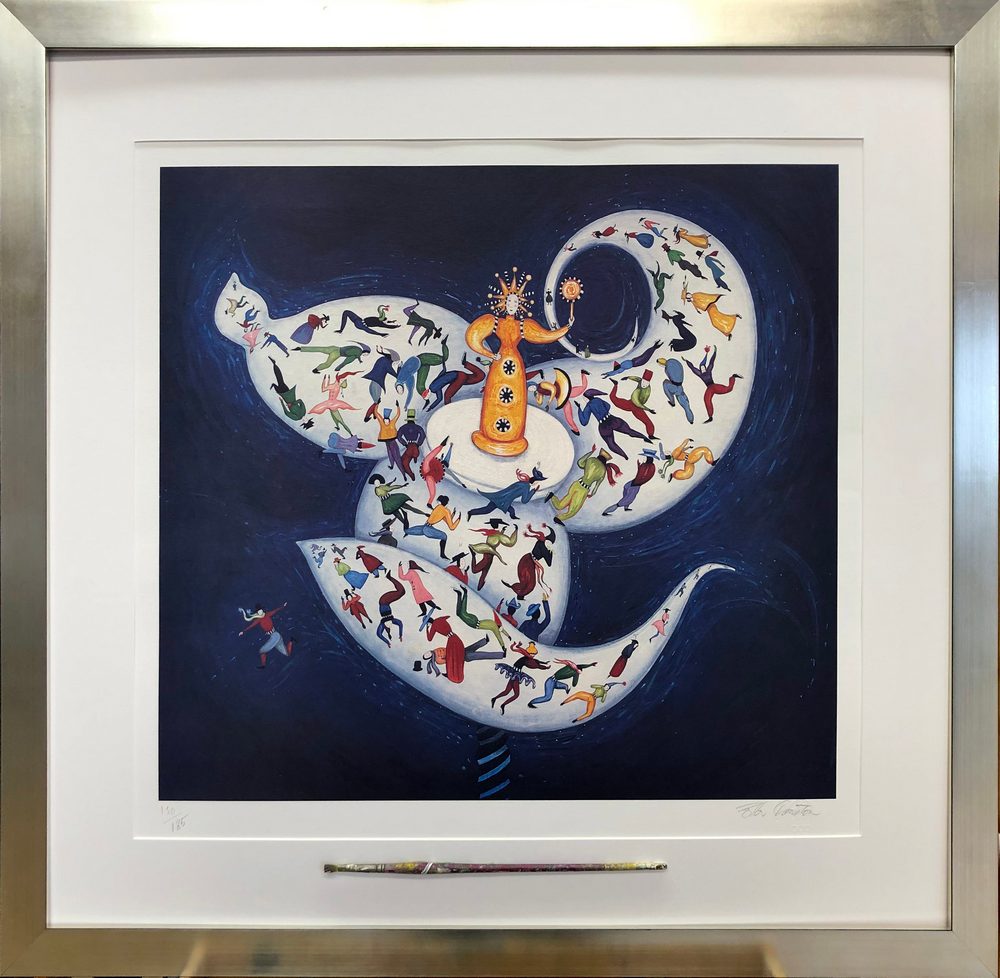 Every Olympian’s ultimate goal is the Quest for Gold. 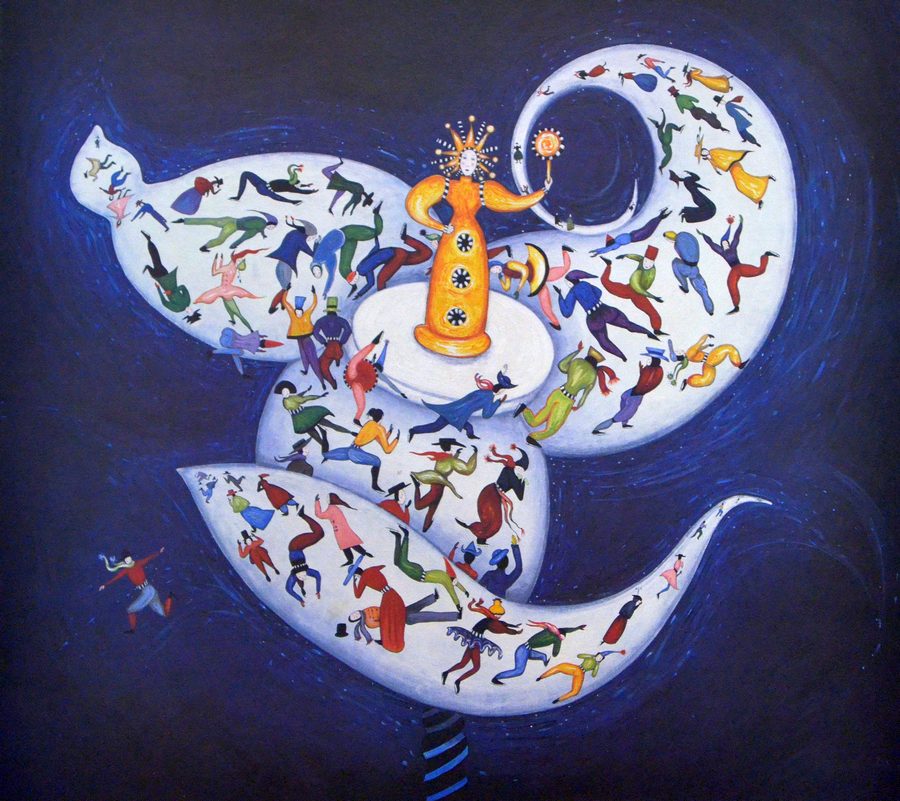 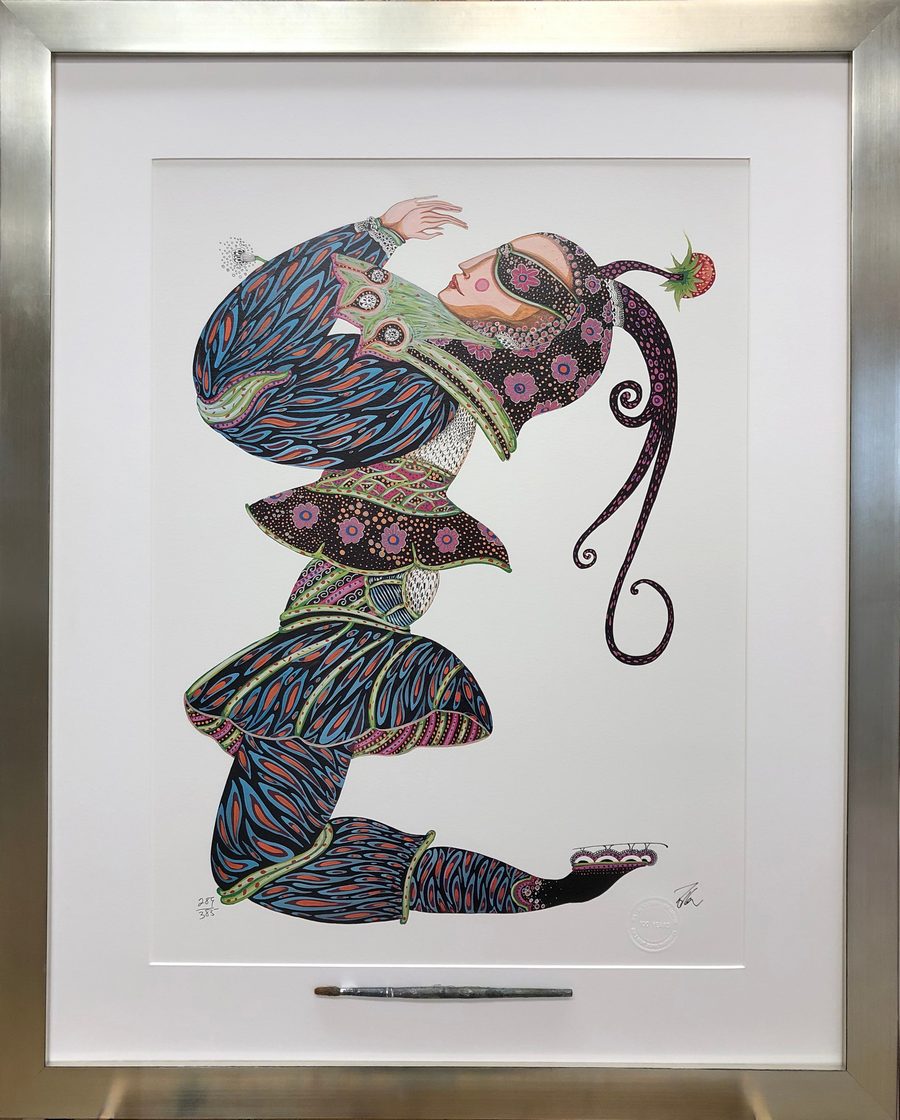 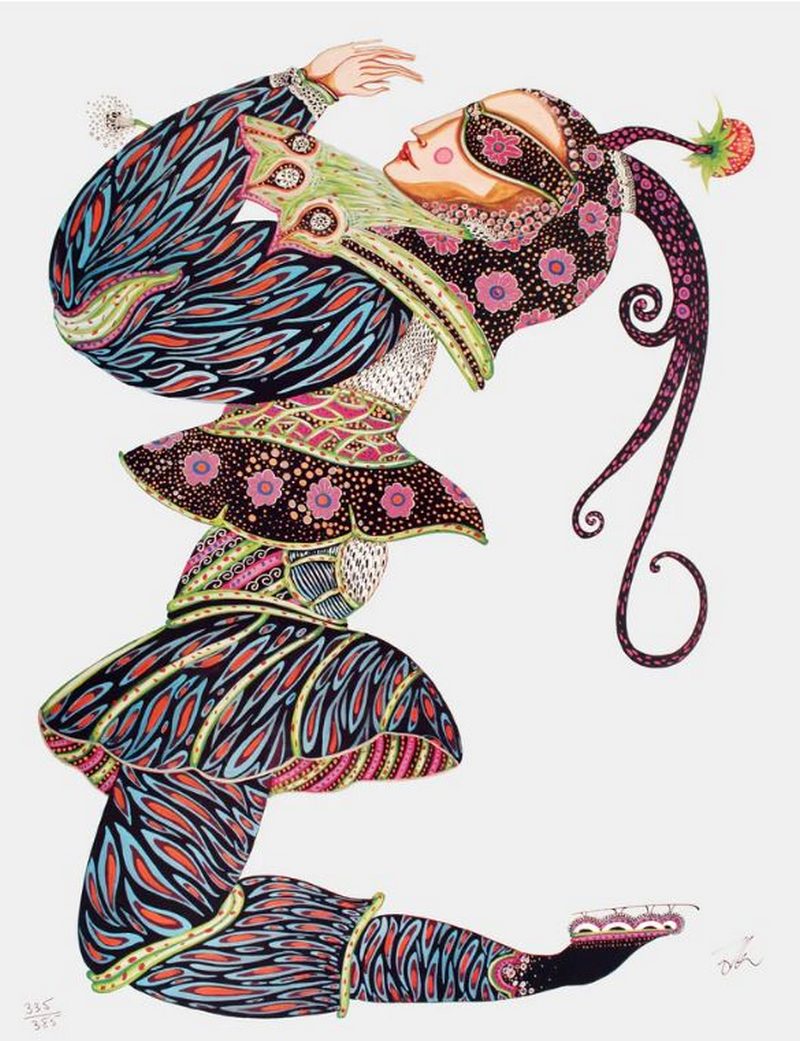 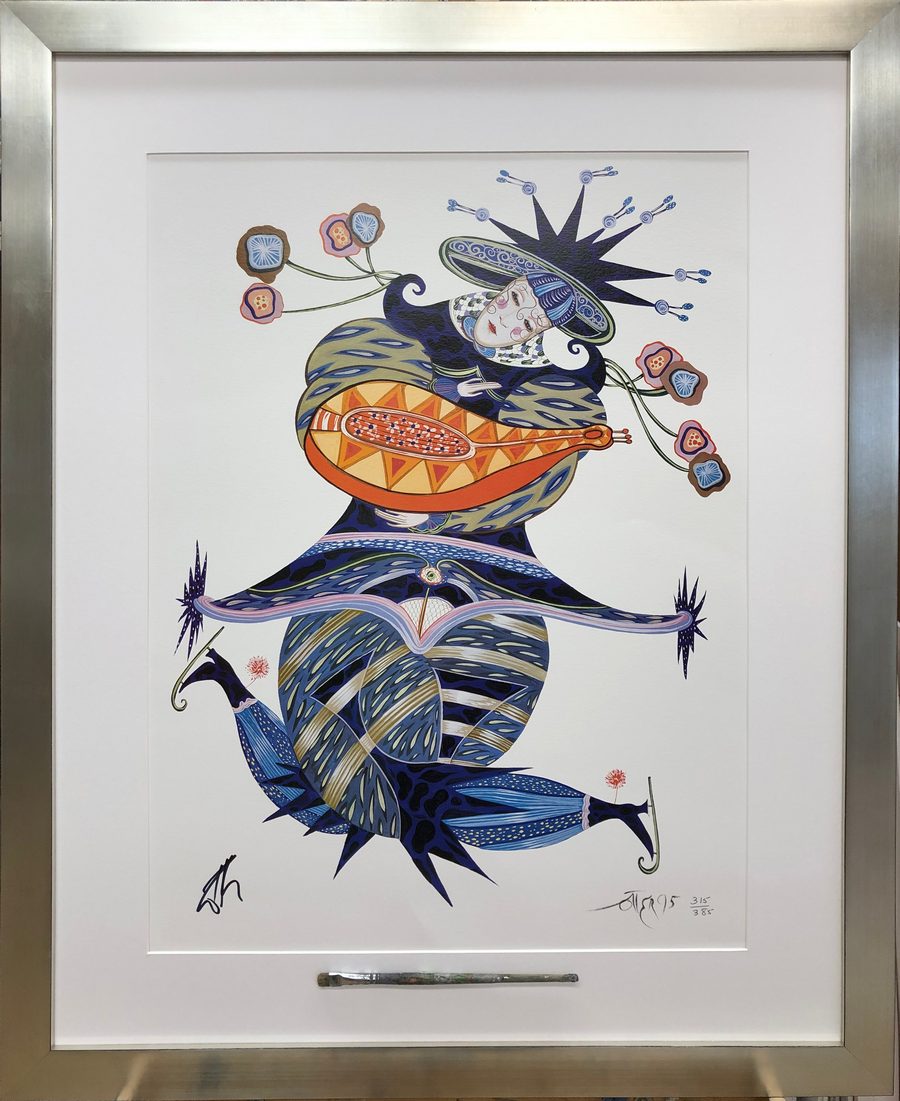 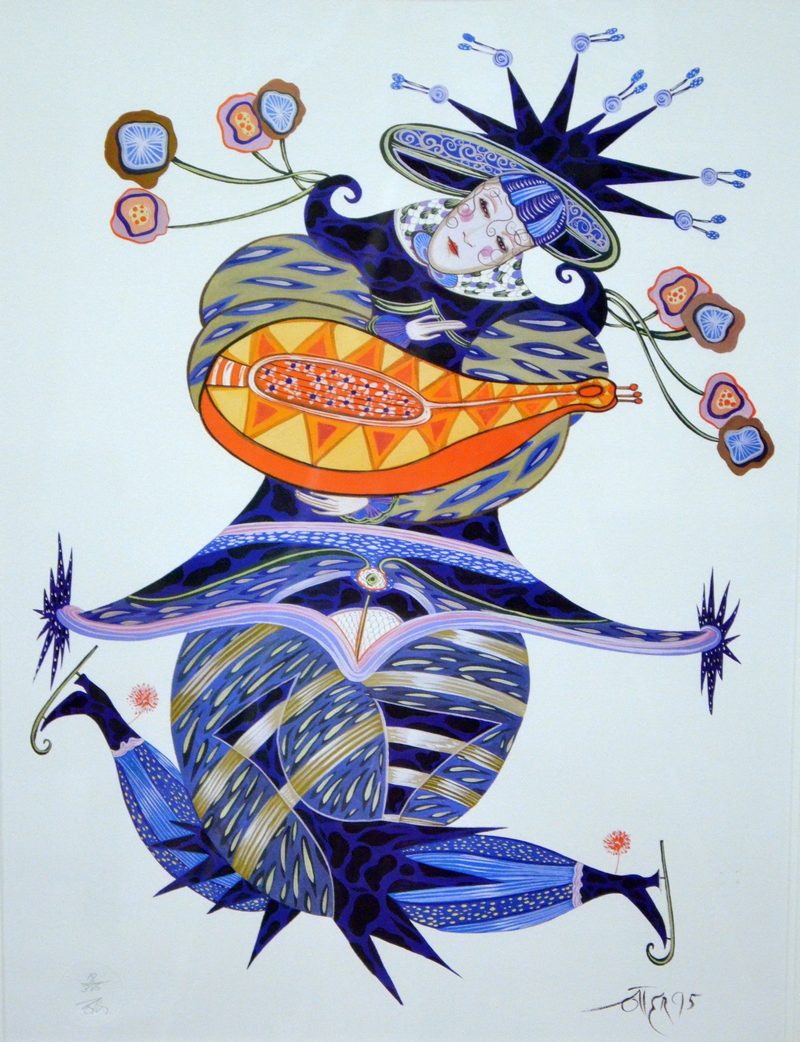 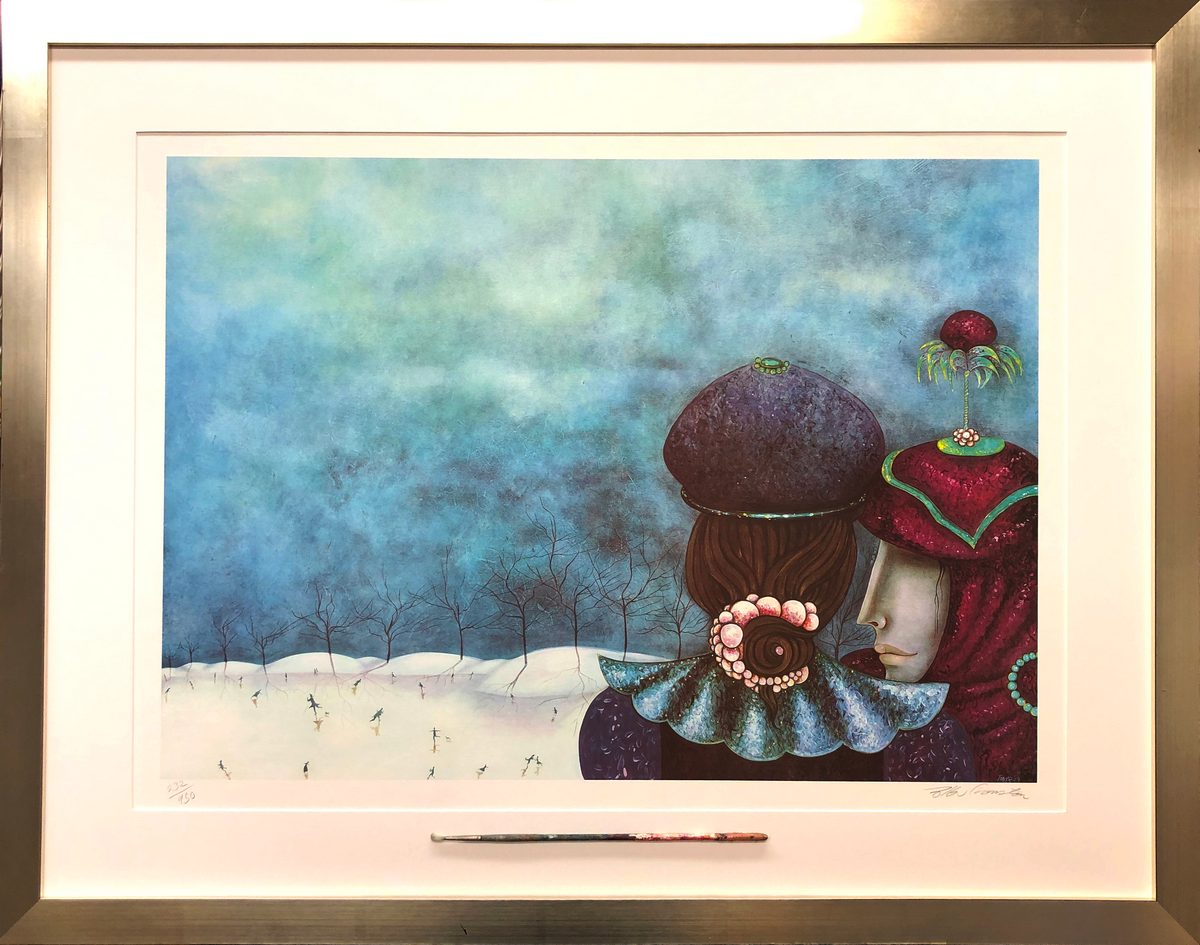 Unfair judging is a constant dread in competition. In Similar Point of View, two judges conspire to prejudge a group of skaters and find that they agree. 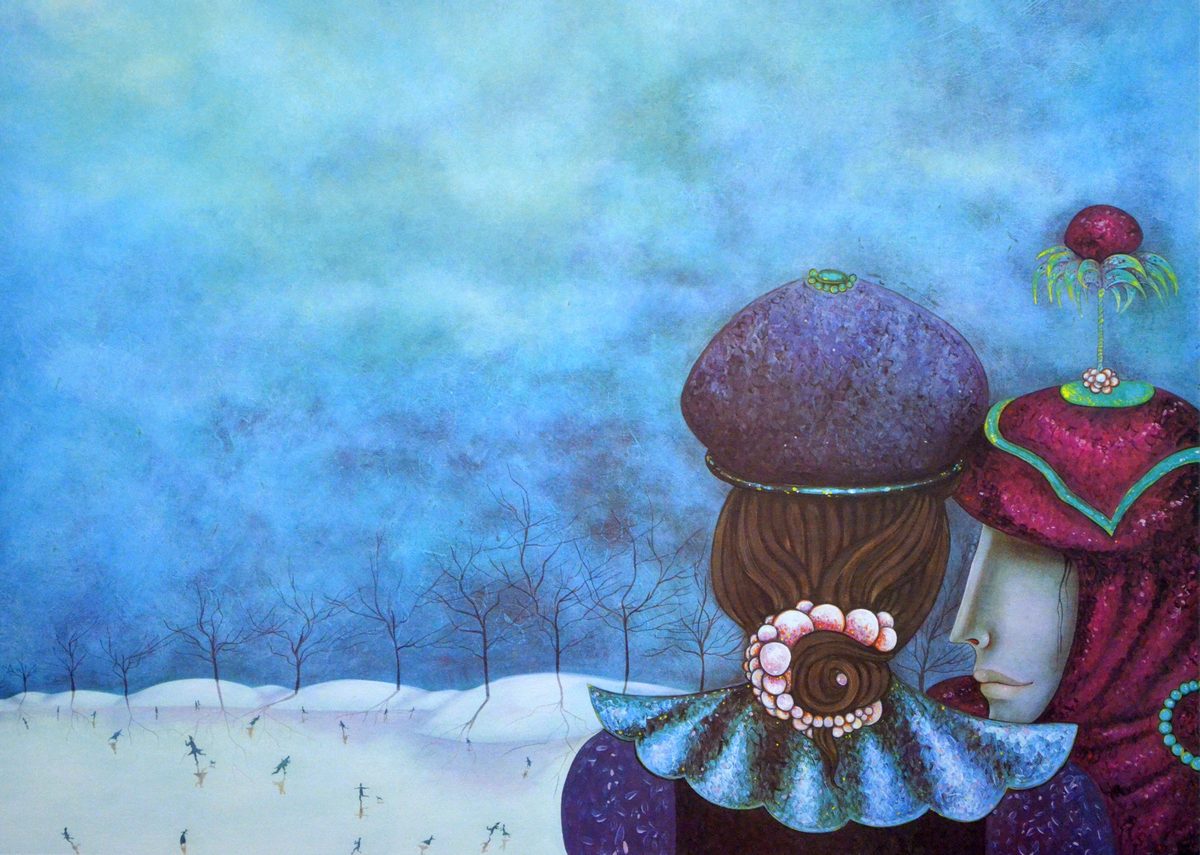 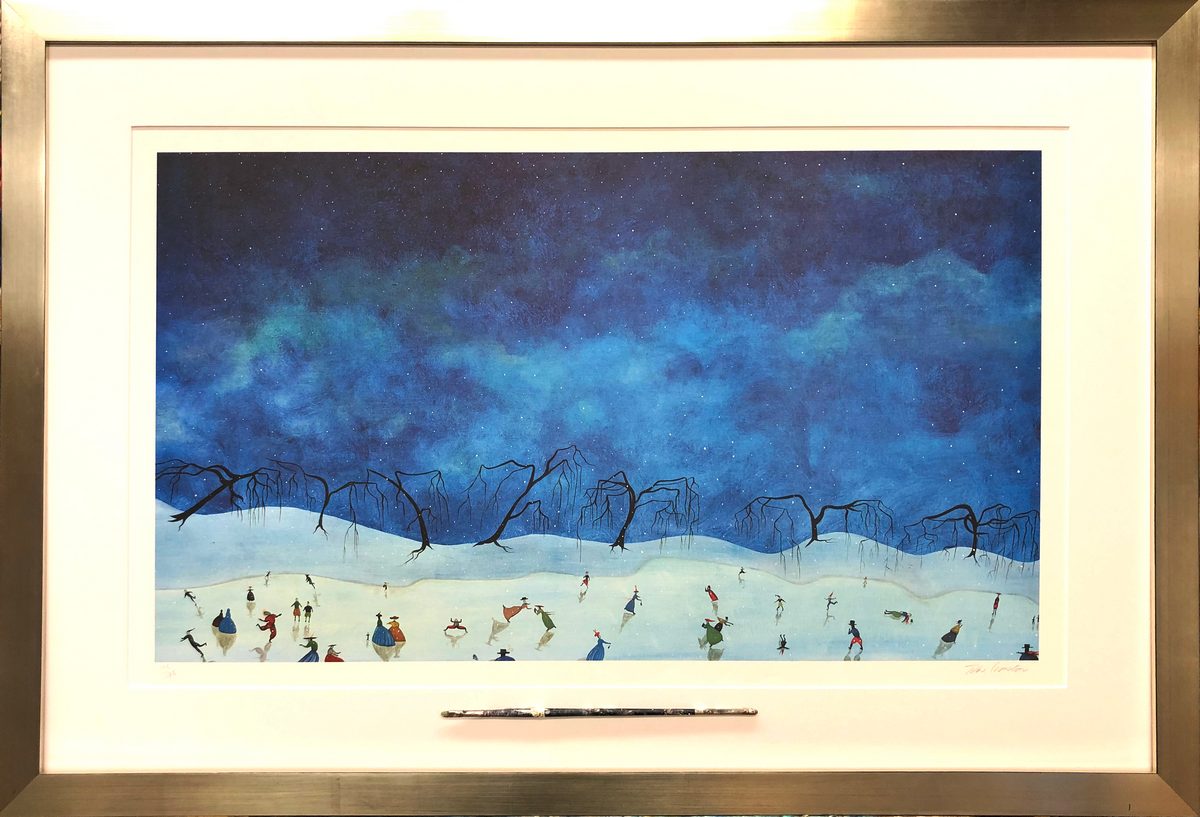 Winter Blues I & II are dreamlike images of the ever -present companion of the serious skater—loneliness. 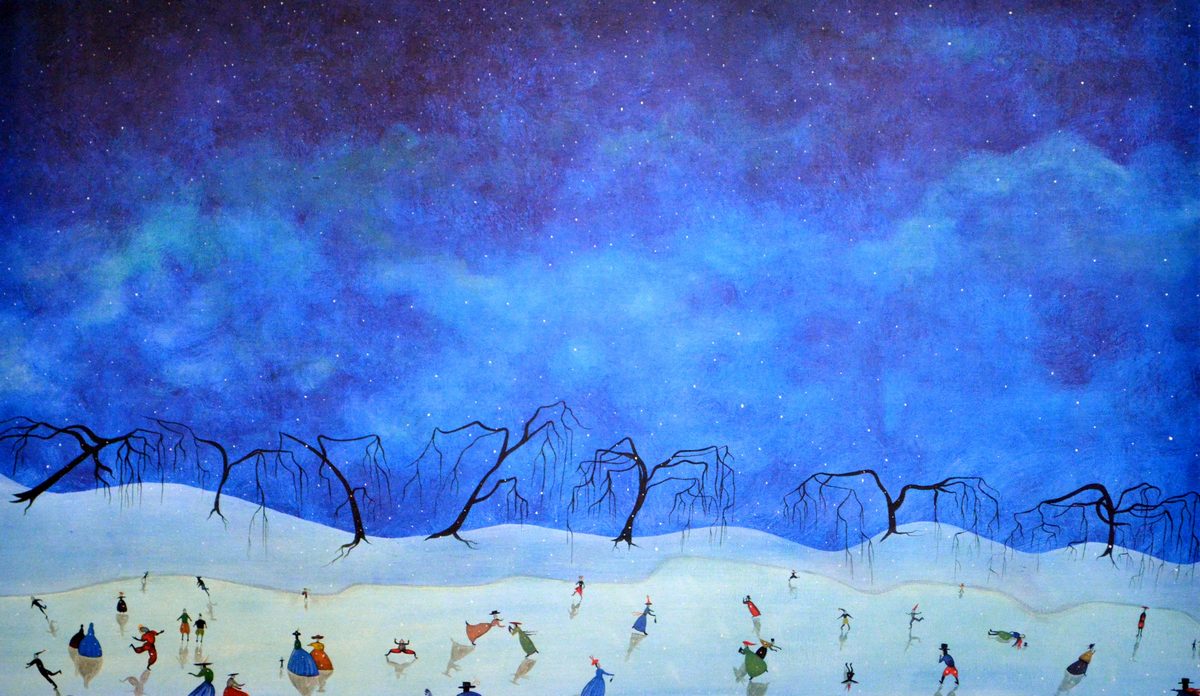 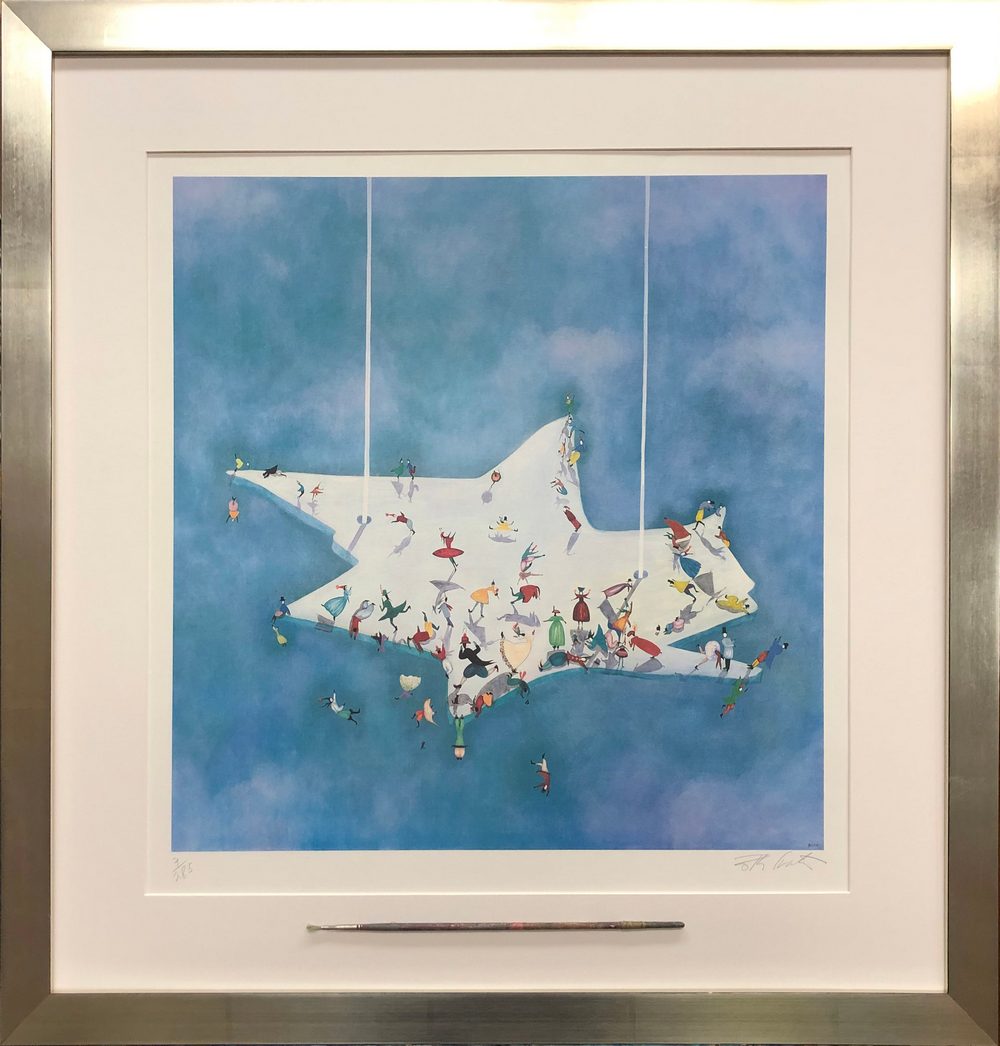 In The Edge, skaters float on a gigantic swing made of ice. Having made it to the exalted plateau of champion, the skater now feels the added pressure of maintaining excellence. 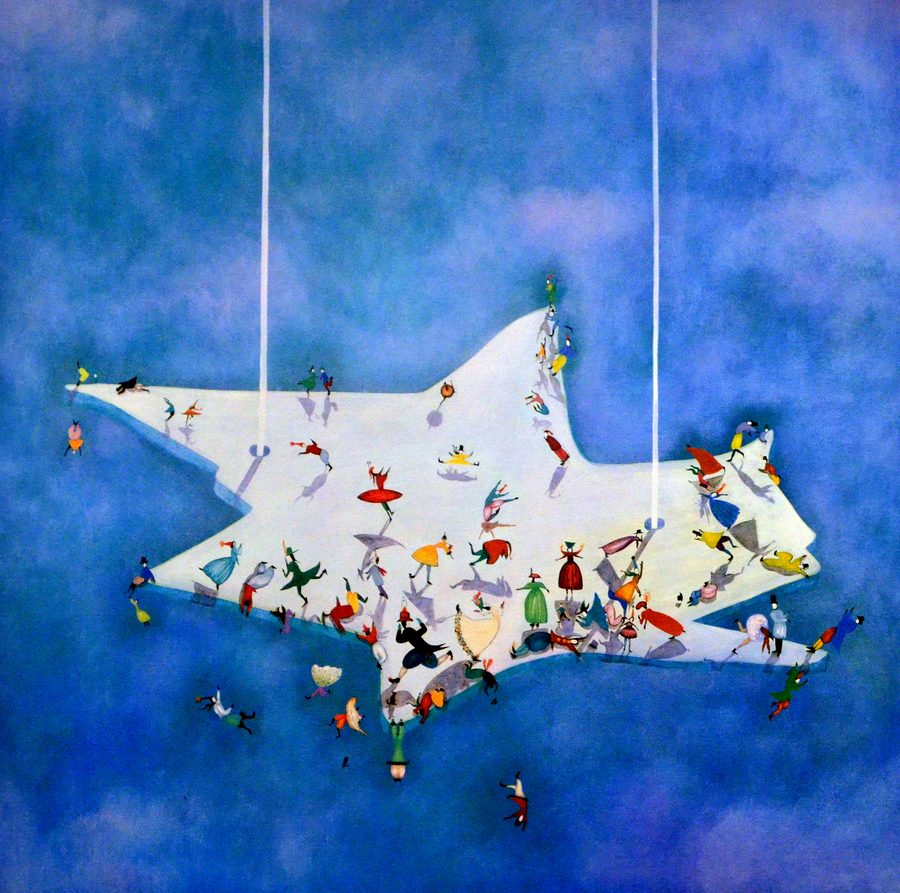 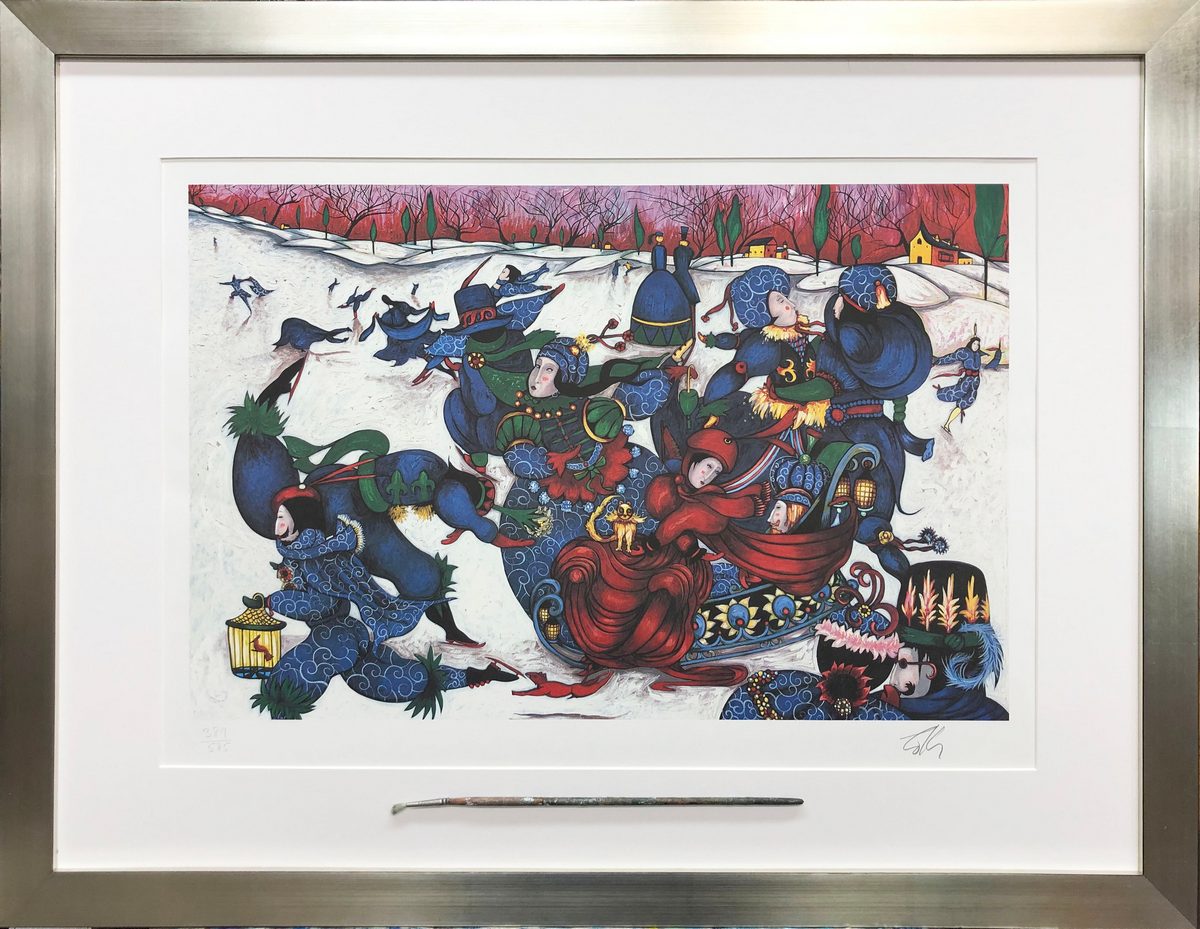 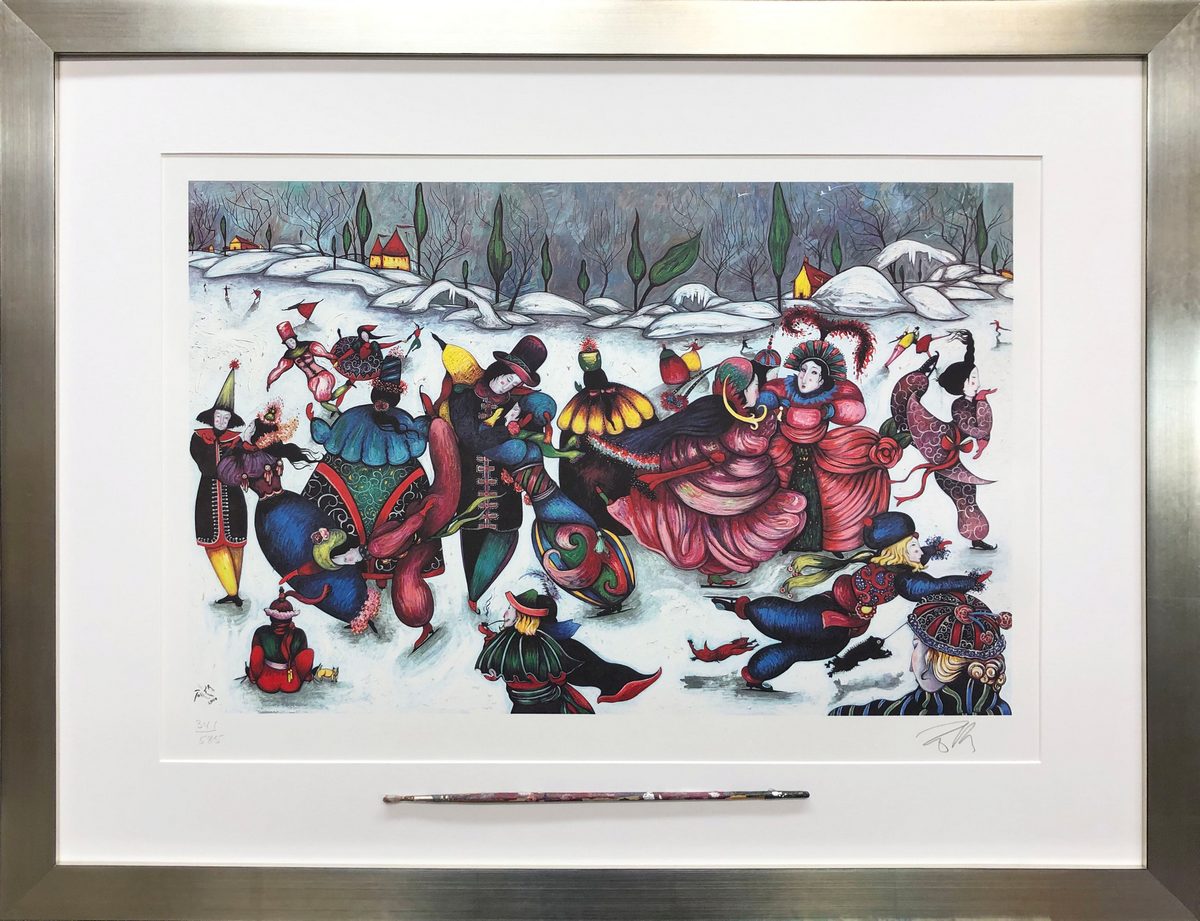 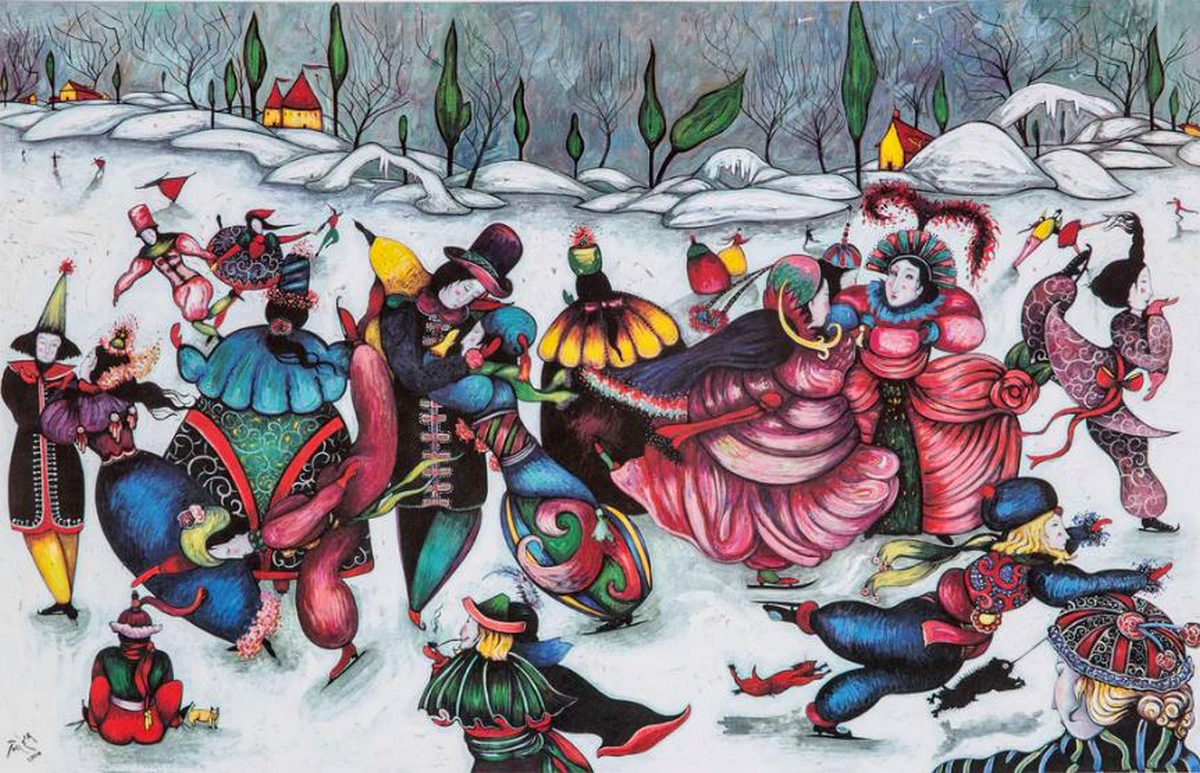 Each signed, numbered print is accompanied by a paintbrush from Toller Cranston’s studio in San Miguel de Allende. Please contact the gallery for further information. 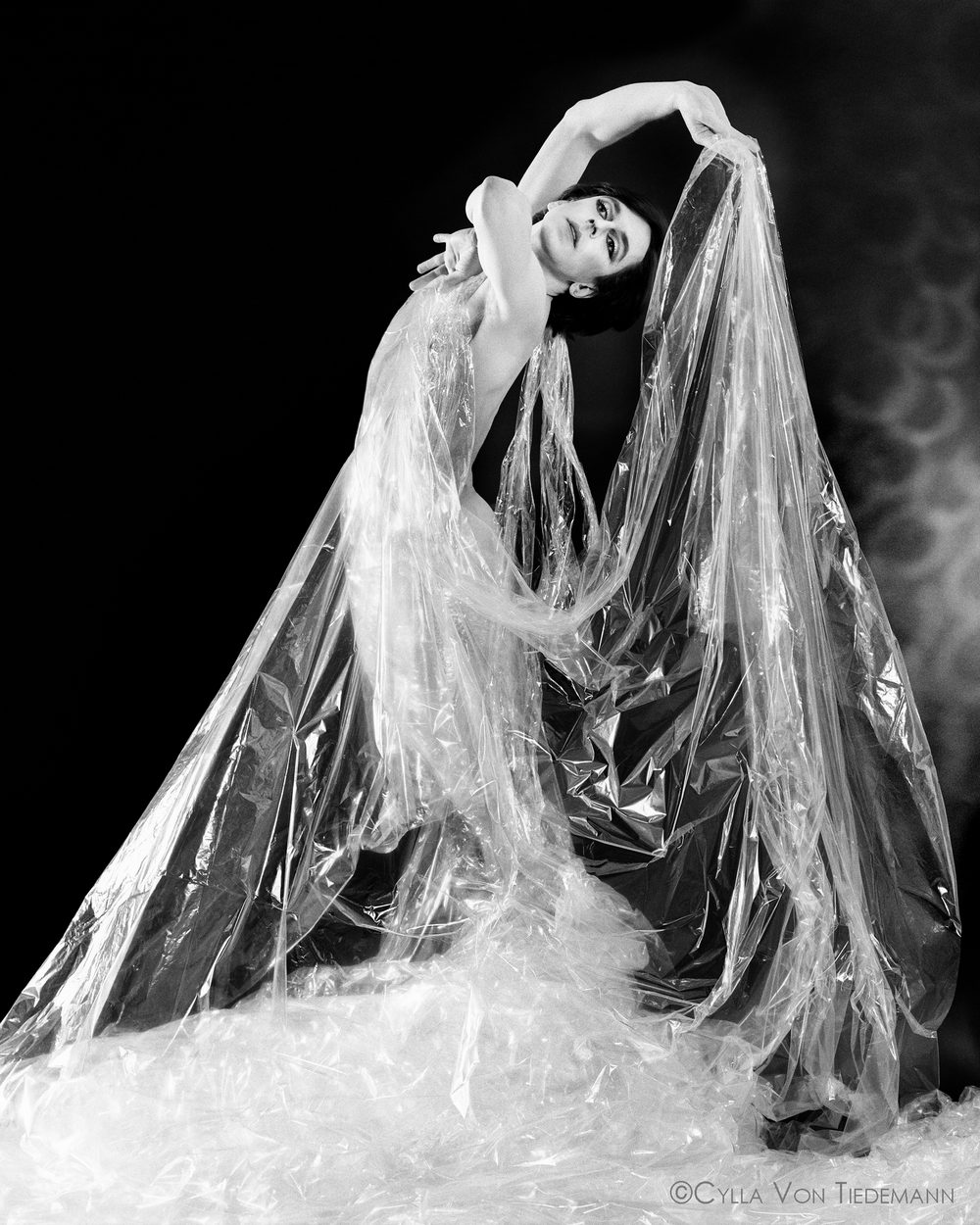 In the mid 1980’s, at a time of great transformation in his life, Cylla stepped into the studio with Canadian Icon Toller Cranston. Toller thought it would be a project that would explore visual angles of the camera, however what Cylla captured of his incredible performance; the spirit and beauty Toller expressed with his body – resulted in a project that portrayed his moment of metamorphosis. This series of images is being exhibited for the first time.

“Toller was an incredible performer and I could not stop shooting him … I must have shot 15 rolls of film … bang, bang, bang. He’s truly a dancer. His spirit and his beauty is in his body. It’s in every muscle. He has such an understanding of presenting; of bringing that out and performing. He gave me a lot to work with.” 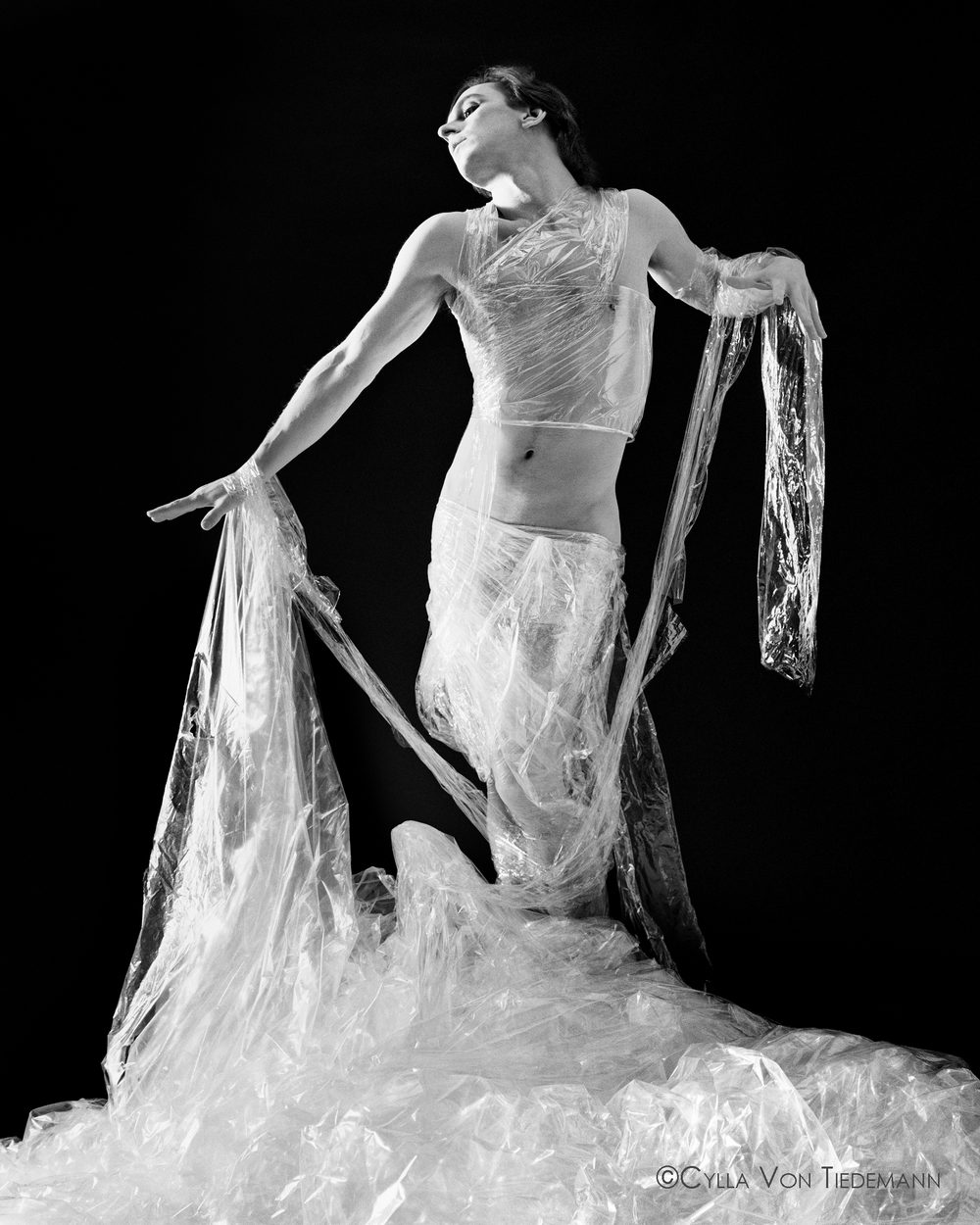 Contact Us to Submit Artwork for Sale
Tony Bianco