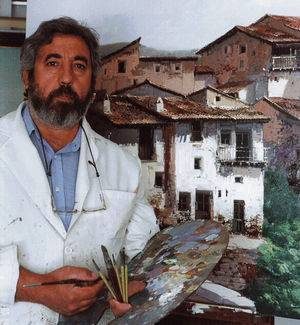 José Barbera (1948-2005) was born in Valencia, Spain in October 1948. The artist described himself as a representational landscape painter. His focused subjects were landscapes, flowers, and houses. The works of José Barbera are in private collections throughout the world.

Jose Barbera was born in Valencia, Spain in October 1948. He began to paint at the age of 10. In 1957 he began his formal training in art. He attended the Art & Craft School in Valencia from 1960 to 1965, where he received a Certificate of Success in Art, and attended the Fine Arts High School in San Carlos, Valencia from 1967 to 1972. During his education and training he studied under the Spanish professor, Mr. Genaro La Huesta and Mr. Santiago Rodriguez.

Barbera began painting professionally when he completed his training in 1973. Since this time he has exhibited in galleries, including Sala Ticiano, Valencia in 1973, Galeria San Horge, Alcoy, Alicante in 1980, Galeria Bachiller, Vaencia in 1983, Galeria Ingres, Madrid in 1984, Galeria Gabarro, Sabadell, Barcelona in 1986, Galeria De Arts, Zaragoga in 1987, Galeria Belles Arts, Gijon, Asturino in 1988 and Galeria San Gorg, Alcoy, Alicante in 1990.

The Town Hill in Paterna, Valencia displays the work of Barbera. The works of Jose Barbera are in private collections throughout Japan, Saudi Arabia, and Holland. A list of Barbera collectors includes Prince Takh Bin Salman Bi Abdulaziz Al Sand of Saudi Arabia, indiviuals from the Matiamo, Japan and Holland, among other important business people throughout the world.

Publications that have featured this artist include: The Lesante Newspaper, Valencia, 1978, The Provincias Newspaper,Valencia,1980,The Diario Dsciscis Newspaper, Madrid 1983, Barbera is also featured in the Dictanastio Pictores Esculleres Espaniles, Sigle XX. An artist reference book, which was published in Madrid in 1994.

The artist described himself as a representational landscape painter. His focused subjects were landscapes, flowers, and houses. Jose Barbera was married with two children. He passed away in 2005.

View any, or all Historical Paintings on our Sample Wall

Upload a Photo of Your Space and View all Historical Paintings